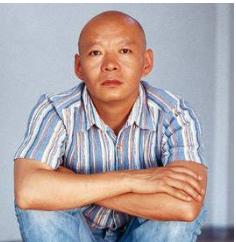 In his oil paintings, Yue Minjun often inserts himself in iconic moments in art history, painting exaggerated self-portrait figures in candy colors. The figures bear wide smiles with gaping mouths as they enact poses from the works of Caravaggio and other artists from the Western canon. Transforming himself into an icon, the artist has said, “was not meant as a self-portrait in its traditional sense, but something more like a movie star acting in different roles.” Surrealism was an early influence on Yue, who shot to the top of an explosive Chinese contemporary scene as a member of the Cynical Realist movement, his serious political criticism and social commentary hidden behind the mask of his smiling faces. In another series, Yue turned his practice on its head, recreating famous Western and Chinese socialist paintings as empty settings with their subjects removed.