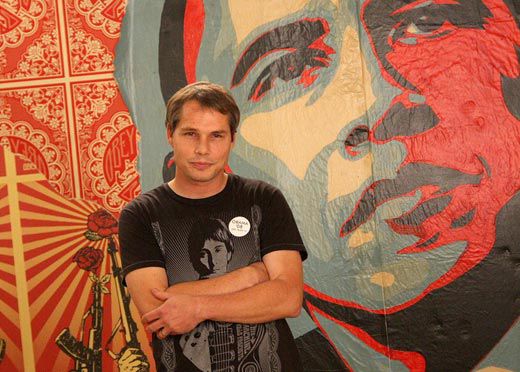 Shepard Fairey is an American graphic artist and social activist who blurs the boundary between traditional and commercial art through type and image, communicating his brand of social critique via prints, murals, stickers, and posters in public spaces. “Art is not always meant to be decorative or soothing, in fact, it can create uncomfortable conversations and stimulate uncomfortable emotions,” he stated. In 1989 Fairey created the André the Giant Has a Posse sticker campaign, featuring a stylized image of the wrestler André the Giant. This project was the foundation for his seminal Obey series, which helped to push Fairey into the public spotlight. The artist is perhaps best known for his Hope (2008) campaign, which portrays a portrait of then-presidential candidate Barack Obama, in red, white, and blue.