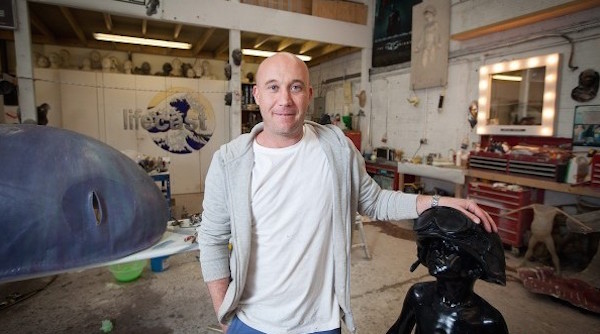 Schoony is a commercial and artistic British sculptor. He has had an extensive career in the cinematic special-effects field, which he entered at age 15 and has consisted of working on more than 100 movies over the course of 25 years. As a prosthetics and makeup artist, his film credits include Harry Potter, Gladiator, and Where the Wild Things Are. Schoony rose to art world fame in 2008, thanks to an extensive street art installation composed of his hyper-realistic plastic casts. His fine art sculpture is most often figural, as evidenced by his best-known leitmotif of a shirtless boy soldier wearing an oversized military helmet. Schoony constructs his pieces through extensive life-casting techniques composed in a variety of different materials, including plastic, bronze, and gold. His imagery incorporates themes of commercialism, violence, and kitsch into its content, exploring contemporary Western society’s detached relationship to warfare.