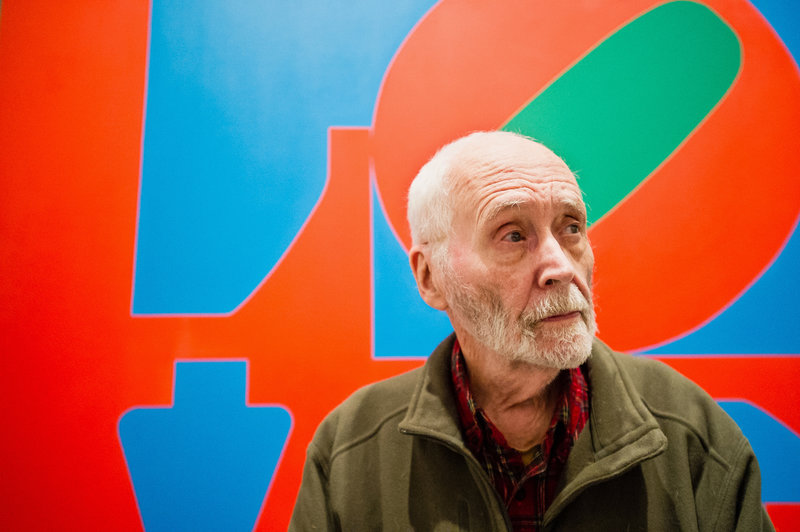 Robert Indiana was an American Pop artist whose work drew inspiration from signs, billboards, and commercial logos. He is best known for his series of LOVE paintings, which employed bold and colorful letterforms to spell out the word “love.” “Oddly enough, I wasn’t thinking at all about anticipating the love generation and hippies,” he once explained. “It was a spiritual concept. It isn’t a sculpture of love any longer. It’s become the very theme of love itself.” Born Robert Earl Clark on September 13, 1928 in New Castle, IN, he adopted the name of his home state after serving in the US military. Indiana went on to receive his BFA from the School of the Art Institute of Chicago in 1954. Following the advice of his friend Ellsworth Kelly, the artist relocated to New York, setting up a studio in the Coenties Slip neighborhood of Lower Manhattan. It was here that Indiana became acquainted with a number of prominent artists, including Agnes Martin, Jack Youngerman, and James Rosenquist. Over the following decades his work became increasingly popular, with both his LOVE and HOPE motifs transformed into a number of public sculptures. In September 2013, the Whitney Museum of American Art opened “Robert Indiana: Beyond LOVE,” the artist’s first retrospective in New York. Indiana died on May 19, 2018 in Vinalhaven, ME. Today, his works are held in the collections of The Museum of Modern Art in New York, the Tate Gallery in London, and the National Gallery in Washington, D.C., among others.