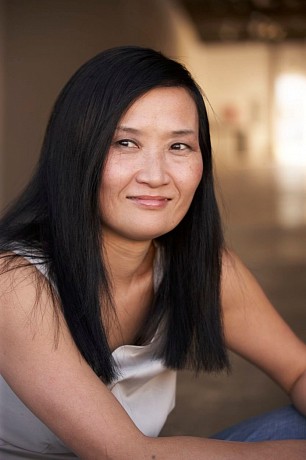 Rimi Yang asian ethnic Korean who was born and raised in Osaka, Japan. In 1986 she moved to Ohio where she studied at Bowling Green University and then in 1991 to Las Angeles where she studied at California State University and Los Angeles Academy of Figurative Art, the Otis College of Art and Design. She spent a summer in Florence, Italy, studying at the Florence Academy of Art. She has lived worked near the ocean in Santa Monica since 1991. Yang is known for her intense enthusiasm for vibrant color which manifested in both her figurative and her abstract paintings. After many years in the field of books she has come later to art, making up for that tardiness with her passion for hersolitary studio practice. Celebrating the chaotic emotional duality that exsist in life in her art, she reveals in the confusion mankind creates in its attempt to order the un-orderable and to explain the unexplainable. Adhering to Joseph Campbell’s dictum that the best things in life are those you cannot explain. Her paintings are intuitive, instinctive, balancing acts of contrasts. Building up and tearing down of surfaces and images searching for reason where none exsists, for that imaginary perfect world of equilibrium on each canvas. Creating a new language with each work, using each as a stepping stone to the next she is dedicated to making each painting better than her last.That Yang’s work is universal in spirit yet personally intimate is evident upon viewing the non-destructive whole. Yang has exhibited extensively in the United States, Denmark, Germany, China, Sweden, Ireland, the UK, and Canada.