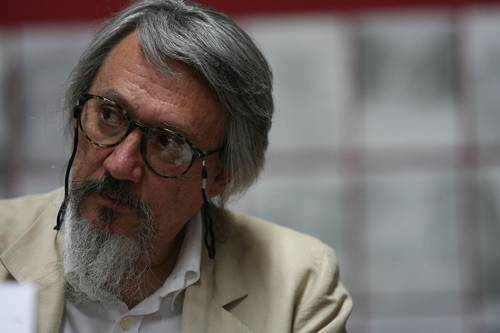 In the vibrant and colorfully kinetic works by Manuel Marin, we see the clear evidence of a life filled with marvelous adventure and significant artistic talent. Born in 1942 in Cieza, Murcia, Spain, Marin developed a passion for bull fighting at the age of 10 and at 16 fought his first bull fight, going on to train with some of the most recognized bull fighters of his day. At 20, he left Spain for London where he met British sculptor Henry Moore who employed Marin as his assistant. In 1964, Marin moved to New York to work in an art gallery. So inspired, he later opened his own gallery where one of his clients was Andy Warhol who became a great friend. There he also met and became friends with artists like William Kooning, Jean Michel Basquiat, Robert Indiana and Keith Haring among others. It was in this milieu that he was inspired to create his own work. In 1969, Marin became interested in mobiles as sculpture, and it quickly became obvious that he had discovered his ‘raison d’être’ and his ‘métier’. In 1970 he had his first gallery exhibition and his work has subsequently been exhibited all over the world. Famous for his distinctive, brightly-colored mobiles, sadly, Manuel Marin died in 2007, though today his work – both robust and at the same time elegant – is displayed in many private and public collections in America as well as in Europe, most notably at Malaga Airport in Southern Spain.