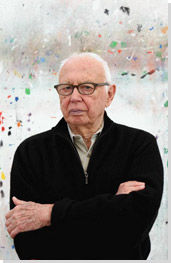 Ellsworth Kelly has been a widely influential force in the post-war art world. He first rose to critical acclaim in the 1950s with his bright, multi-paneled and largely monochromatic canvases. Maintaining a persistent focus on the dynamic relationships between shape, form and color, Kelly was one of the first artists to create irregularly shaped canvases. His subsequent layered reliefs, flat sculptures, and line drawings further challenged viewers’ conceptions of space. While not adhering to any one artistic movement, Kelly vitally influenced the development of Minimalism, Hard-edge painting, Color Field, and Pop art.

Kelly intends for viewers to experience his artwork with instinctive, physical responses to the work’s structure, color, and surrounding space rather than with contextual or interpretive analysis. He encourages a kind of silent encounter, or bodily participation by the viewer with the artwork, chiefly by presenting bold and contrasting colors free of gestural brushstrokes or recognizable imagery, panels protruding gracefully from the wall, and irregular forms inhabiting space as confidently as the viewer before them.
Real-life observations are the backbone of Kelly’s abstraction works, which are replications of the shapes, shadows, and other visual sensations he experiences in the world around him. As did the early twentieth century Dadaists, Kelly delights in the spontaneous, the casual, and the ephemeral means of finding such “readymade” subjects.
The subtle fluctuation between the meditative, decorative and industrial in much of Kelly’s work can be traced in part to this design training in art school. In this sense, Kelly continues Henri Matisse’s lyrical and decorative ideal of creating an art of visual serenity, even as the painted motif is now reduced to its simplest and sometimes most mysterious configuration. The special camouflage unit of which Kelly was a part during his service in World War II, and the principles of visual scrambling he undertook, has also contributed greatly to Kelly’s intense visual motifs.