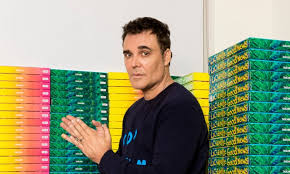 Discovered by Andy Warhol at the age of 17, David LaChapelle began working for Interview Magazine at the threshold of his prolific career. Soon to be known for his hyper-real, distinctly saturated depictions of celebrity culture—Paris Hilton, Muhammad Ali, Britney Spears, Madonna, and Tupac Shakur figuring among his subjects—LaChapelle’s earliest work explored themes of mortality and transcendence through fine art, black-and-white photography. After tremendous success in commercial photography, music videos, and filmmaking, LaChapelle has returned to the gallery settings where he first began. His work today explores the metaphysical themes of his earliest work, referencing art history and religious iconography to make profound commentaries on the contemporary world. “I reintroduce my personal ideas of transfiguration, regaining paradise, and the notion of life after death,” says the artist, who now calls a remote farm in a Hawaiian jungle his home.