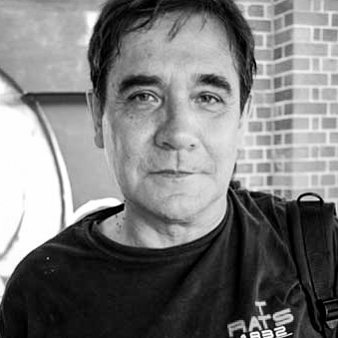 Pioneering French graffiti artist Blek le Rat counts the infamous Banksy among his many admirers. Born Xavier Prou, the artist was one of the first graffiti artists in Paris and has been described as the “Father of stencil graffiti.” Blek was introduced to graffiti after a trip to New York City in 1971 and was inspired to bring the style back to Paris, adapting the stencil as a more fitting technique for French architecture. He is best known for stenciling a giant graphic image of a rat all over Paris in the early 1980s, which to him symbolized both freedom and the dissemination of art through the city as if it were the plague. In recent years his work has become increasingly political, focusing on the homeless, the environment, and other social causes. Blek’s posters of kidnapped French journalist Florence Aubenas helped raise public awareness of her situation, pressuring politicians and journalists to work harder for her release.