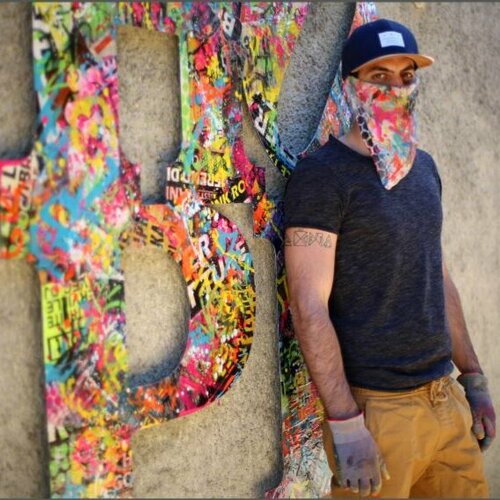 Aiiroh Oeuvres is a French pop/street artist. At a young age, he started as a graffiti artist in train stations in several cities. Soon after, he was introduced to stencil work which made it possible to create art faster on the street. With a guidance of a friend, he eventually discovered the work of the “affichistes” such as Raymond Hains, Villeglé, Dufrêne and Rotella. The latter became a real obsession for the artist. “I take great inspiration from this move- ment which has a great poetic dimension for me. I sometimes spend whole nights wandering to find and snatch the poster that I like. I think I add a touch of optimism and color and do not like to politicize my work, but now more than ever, my artistic practice of “affichiste” finds an echo to the exhibition of 1961 of Hains which moved me a lot, “France in shreds.” In some of his works, Aiiroh incorporates brands to remind us of current trends and how they may influence our daily lives. The anarchy of dripping, the turbulence of the compositions come to stand in contrast with the pure lines of the graphics of the brand logo, but also of the famous LOVE of the American artist Indiana. Does the graphic strength of these logos also have an effect on our collective unconscious as well as on our aesthetic codes? The artist ponders. For several years, he has been exhibited in some twenty galleries in France as well as internationally (Switzerland, Italy, UK, Greece, Israel, USA, Singapore, Hong Kong, Japan). His latest accomplishments have been commissions from large brands such as Ferrari.