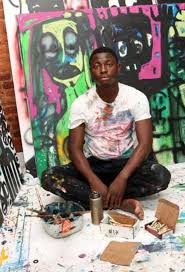 Abdoulaye Diarrassouba, known as Aboudia, chronicles the street scene in his city of Abidjan, the capital of Côte d’Ivoire. In his vibrant, large-scale mixed-media paintings and drawings, which recall those of Jean-Michel Basquiat, Aboudia takes inspiration from the aesthetics of graffiti and traditional African carvings. He has depicted youths in his city’s toughest neighborhoods and the violent post-election conflict that ravaged Abidjan in 2011. While his recurring skull, soldier, and bullet motifs speak to unthinkable trauma and brutality, Aboudia’s bright color palettes reinforce the enduring innocence of the children who live amid the chaos. Aboudia has exhibited widely across Côte d’Ivoire and in London, Paris, New York, and Marrakesh, among other cities. His work has been acquired by Saatchi Gallery, the Jean Pigozzi Collection of African Art, and the Nevada Museum of Art, and on the secondary market, it has sold for six figures.